Updates to Gary's profile since your last visit are highlighted in yellow.

Retired from the Presbyterian ministry after 37 years. Served 4 churches - 2 in Minnesota, one in Wisconsin, one in Maryland.
I enjoy spending time at our recently purchased North Shore cabin, reading books I never got around to before, and spending time with my grandson.

Your stained glass window skills are wonderful, John. We could have used your craftsmanship in at least two of the churches I served. They would have enriched the sanctuary and worship experience. Thanks for your post and pictures.

Gary Hanson
Gary Hanson added a comment on his Profile.

Nice tribute to Dave, Rick. Your words helped me get to know each of you better.

I cannot add much to the wonderful tributes already said about our friend and classmate, Jim White.  The attached picture was taken a month ago as three old friends (Bob Downs, Jim White, Gary Hanson) were about to go out for lunch.  So glad we did as it was the last time I saw Jim.  He thought he had several more months to live, but if not, he was prepared.  A man of deep faith, I have seldom met anyone who was more ready to pass on to eternal life.

His memorial mass is tomorrow (March 7th) 5pm at the University of St. Thomas chapel.  It will be a wonderful service.  Hope many of our classmates can join us and pay tribute to this one of a kind man! 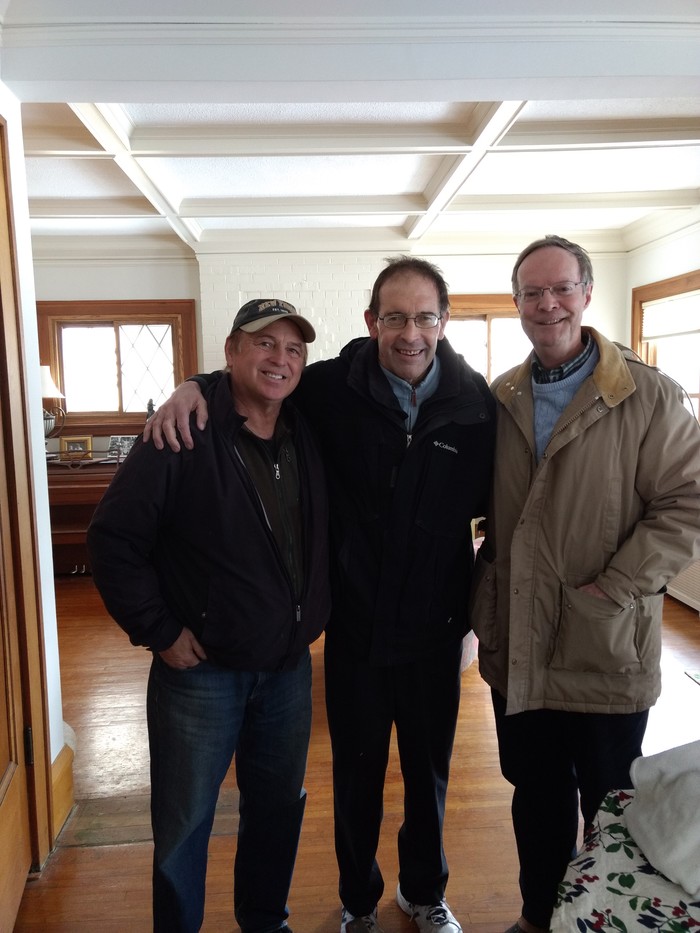 Marty and Julia: I saw you briefly at Poor Richard's the first night of the Reunion and we chatted briefly. I vaguely recall your saying that you live on the North Shore now? Then I read some of your bio below where you owned a resort in Castle Danger. For the past 3 years, my wife and I have owned a cabin near Castle Danger on the Big Lake. If you are nearby, I'd love to visit more with you.
Can you send me your address and contact information?
my best, Gary Hanson

Wow! What an amazing 3rd Grade story about Al Hipps, Jean. I vaguely recall him mentioning all of that commotion at his house one day, but I don't know if he ever knew who caused it.
Hope to see you at the Reunion and we can tell more stories!

Gary Hanson
Gary Hanson has left an In Memory comment for Alan Hipps.

Al Hipps was one of my best friends ever since grade school.  We lived about a block apart, attended Concord Elementary, played sports and were in band together.  Hanson and Hipps… we called ourselves “The Big H”.

After attending college for one year, Al enlisted in the Army.  Through his letters to me, he shared his army experiences while I updated him with news of home.  Receiving firsthand knowledge of his Basic, Advanced and Specialty training through Forts such as Campbell, Lewis, and Benning, I got the better of the deal by far.

Sergeant Hipps was sent to Vietnam in 1969. For the next year or so, each of Al’s letters began with a countdown of the number of days he had left.   I was treated to almost bi-weekly briefings on the War from someone living in the midst of it.  His accounts of patrol duty and enemy fire-bombing were riveting.  He once wrote of an explosion that killed his buddy only thirty feet away.  Al could have been a journalist.  His writing was factual, yet included the sounds of the night, smells of the jungle and a generous sharing of his feelings.  It was like having my own personal war correspondent.

Al survived his tour of duty and upon returning home, began a successful landscape business.  But his health gradually worsened over the years and he eventually died from a rare bile duct cancer.  This disease is presently attributed to a parasite called liver fluke.  Al, along with many other veterans, undoubtedly ingested the parasite while drinking the murky Vietnamese river water.  Congress and the VA are just now beginning to give attention to this deadly connection, too late for my friend, however.

A half dozen of his boyhood chums attended Al’s military funeral at Fort Snelling in July of 2014.  During a lunch afterwards, we each raised a glass to our classmate and I thought to myself, “Rest in peace, Big H. Thanks for serving our country, and thanks for being my friend.”